Everyone is talking about Libby and Frank's forthcoming wedding, but the nuptial plans are thrown into chaos at Frank's stag do - all dignity is lost and so is Frank when a close encounter sees him abducted! 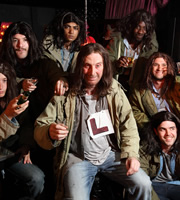 Meanwhile, months after Mimi unexpectedly gave birth, everyone wants to know who's the daddy? Mimi is determined to discover the identity of Cilla's father and sets off on a secret mission.

Newcomers Avril, Jackson and daughter Letitia Powell have firmly settled themselves within the community and Avril volunteers to host Libby's hen night, but celebrations are brought to a halt when disaster strikes for one of the Maguires.

Karen returns but Jamie is unsure of her motives. Chesney's cousin Sita causes quite a stir especially with Carl Gallagher.