It's a grand occasion as the Chatsworth inhabitants celebrate being awarded an Olympic ring from London 2012.
Preview clips 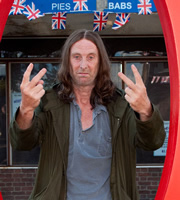 The Maguires toast the expansion of their empire: Mimi's hijacked control of the local school via the PTA and Shane's setting up a new business venture. Business is booming, but the family is thrown into turmoil when Jamie makes a shocking discovery and withdraws from the firm.

Can Mimi persuade Jamie to return as head of the family before all is lost? At the Gallagher's, Frank finds himself climbing the employment ladder as janitor of 'St Mimi's School' - conveniently funding his new leisure activity - the Gastric Bandits, a prostitute double act, Sherrilee and Derrilee who light up his life.

The Chatsworth estate is holding a little ceremony.