Quentin Willson admits to having sex in the back of a car, Bradley Walsh says there is no method to his acting and Richard Osman talks about his Pointless bromance.
Preview clips 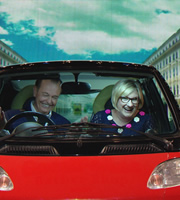 Quentin, asked if he has ever had sex in a car, says, "Yes, in the back. Both the seats were down so it was like a handy double bed. It was meticulously planned."

Responding to Sarah's cheeky question on whether he had decided on his hairstyle with an open top car in mind, Quentin says, "Absolutely, it's pretty aerodynamic."

Assisting her Crime Programme investigation, Sarah is joined by Bradley Walsh. Asked if there is any method to his acting on Law and Order UK, he jokes, "I prepared for the role by just learning lines and remembering them."

Describing him as 'A Teatime Stephen Fry', Sarah asks Richard some rather Pointless questions. Asked about his apparent 'bromance' with Alexander Armstrong, he says, "People often say, 'I love the unrequited sexual tension between you two,' to which I say, 'It's not unrequited!'"

A trailer for the third series of The Sarah Millican Television Programme - with Michael Palin singing The Lumberjack Song in German.

Sarah Millican interviews Richard Osman from Pointless and asks him about stupid answers given by contestants.