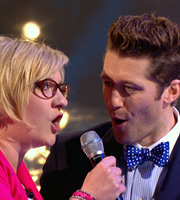 David Harewood, asked about living in Streatham, says, "I love it because it's so unpretentious. One minute I'm flying off to LA and walking past palm trees and plastic surgeons and the next I'm back in Streatham and walking past Greggs and WH Smiths - it's a great leveller."

Asked if people are genuinely surprised that he is British when they see him in Homeland, David says, "British people are surprised I am British! The scary thing is that I meet people in the street all the time and they say, 'What are you doing here, you're American?'"

David gives Sarah some hints and tips on how to perfect a US accent and she reciprocates by teaching him a few Geordie phrases which he can't quite master.

Asked if he has found anything odd in a garden, he says, "I dug up a cat once. It was dead. The lady told me she had buried it but I just forgot where and up it came with the digger."

Matthew Morrison of Glee fame joins Sarah to chat about her favourite show.

Asked about performing at The White House for the Obamas and what it was like being hugged by the president, he says, "When Obama is in the room he is the coolest guy in the room, hands down. It was a cool hug but you can't hold on too long, because you get a secret service guy pulling you off straight away."

To Sarah's disbelief Matthew reveals he has never heard of Cliff Richard, before he and Sarah hit the Glee classroom stage to perform to Wired for Sound.

Sarah chats to Glee star Matthew Morrsion about hair, diet tips, and singing for the Obamas.