Sarah talks business with Apprentice star Stuart Baggs and goes for a walk with the host of Coast, Neil Oliver.
Preview clip 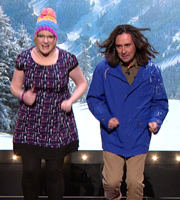 Stuart Baggs, chatting about The Apprentice, and asked if he has cringed at his performance on the show, says, "Quite a few times. It's horrendous."

Asked if he working, he says "I'll take anything. Clearly I'm the most unemployable person in the whole country," adding, "When I went on the show I was told I would get lots of job offers. I got none, not one apart from a Channel 5 dating show and then they wouldn't have me because I didn't fit their target demographic!"

On working from home, he says, "There's nothing nicer than picking up the phone to someone when you are naked. I don't tell them."

Neil Oliver, on maintaining his long locks he says, "It's constant variety. I'm in hotels all the time so I just use whatever's in the little bottles. I like to think it's all the same stuff." Revealing he never condition, he says, "I just wash and go! It never frizzes, it never does anything and I am available for advertising campaigns!"

Chatting about Coast and what is in his ever present satchel, Neil says, "I'm a very clean person, very fastidious and as my smalls are no longer available for wearing I like to keep them separate from the big bag so I put yesterday's pants and socks in the bag I carry around on camera so I know where it all is."

Sarah and her previous jobs

Sarah asks her Dad what she wanted to be when she was younger.