Sarah Millican discusses property and craft shows with Kirstie Allsopp and has a science lesson from Michael Mosley.
Preview clips 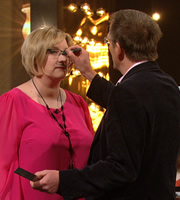 Kirstie Allsopp, asked if she and her co-presenter Phil Spencer are an item says, "I can deny it until I'm blue in the face but it doesn't convince anyone. It's a very hard to explain relationship. People often say, 'You've had late nights in hotels, something must have happened,' but we just haven't. It would be like snogging your brother."

Asked about her love of craft, Kirstie says, "My house if full of crap. I do a lot of fixing at home, but don't get to do a lot of those starting from scratch projects, which is a bit sad," before giving Sarah tips on how to recycle those magazines Sarah's boyfriend likes to read in the loo.

Michael Mosley joins Sarah to chat about his science programmes. Talking about drinking four pints of laxative before swallowing a camera, he says, "It was very unfortunate because that evening I was going to dinner with the director general of the BBC and everything exploded. It was a very, very bad moment. My advice is, don't go out for dinner and whatever you do, don't take the train!"

Michael gives Sarah advice on fasting and exercising and explains the Golden Ratio. Looking at Sarah's facial proportions and comparing her to Angelina Jolie who he describes as 'Perfect,' Michael declares, "Your ratio is spectacular!"

Noel Edmonds and his beard

Sarah is interviewing Noel Edmonds and wants to know all about his famous beard. She also has an interesting theory about the boxes on Deal or No Deal.

Sarah wants to know about Michael's diet which involves him fasting for two days a week. But she's not so keen to have a go!