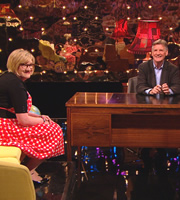 Asked what creature comforts he likes to travel with, Michael admits "I take toilet rolls. The places I go to, you need them."

On whether he always lives up to his reputation of being a very nice man Michael says, "I once lost my temper. In the early 1980s two guys came to interview me about The Missionary. They were rather pretentious clever dicks really, and I walked out of the interview. It was my own house unfortunately. That was the problem. It was the wrong way round. So I banged the door and went out on to the street and left them in there with my wife."

Helen Skelton joins Sarah by Skype from a Blue Peter assignment to chat about children's television.

Talking about her work with The Guides and asked whether she ever got a badge, Helen says, "When I was a Guide I actually got thrown out. We were playing Hide and Seek and my hiding place was so good they had to get the police out to look for me."

Asked why she agrees to extreme adventures, she says, "It's a fine line between brave and stupid. If I'm honest, when I said yes to the Amazon my boss said I should do bit of it and I said I wanted to do it all. And then I looked at the map - I didn't realise how big it was. It goes across the whole country."

Tim Wonnacott joins Sarah for a chat (and a lot of double entendre!) about fine chests, lined drawers and polishing tallboys, not to mention antique muff brushes.

Asked whether his house if full of rubbish he can't shift, Tim says, "I regard it as a lot of treasures, but it's a fair old crush."

Tim and Sarah recreate an antiques show for a valuation or two with a stuffed parrot and surprise guest appearance.

Sarah Millican chats to Michael Palin about this travels, train toilets, and his essential creature comforts.