Sarah talks to the BBC's political editor Nick Robinson about life in Downing Street, has a dream-like experience on the BBC Breakfast sofa with Bill Turnbull and goes clubbing with the cast of Geordie Shore.
Preview clip 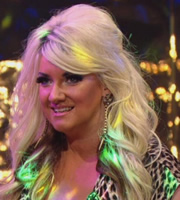 Nick Robinson, joining Sarah from outside that famous black front door, talks about the many hours he spends in Downing Street and the dangers of being caught short, "They won't even let us go through the front door for a pee."

Asked who his favourite politician is he says, "I'll tell you who I miss and I may get booed for this - George W Bush. He just gave great news conferences. They were fabulous. I once asked him a question when we were outside on an incredibly hot day in America and as I didn't have a hat or sun cream I was getting more and more red and the President looked at me and said, 'Next time you should cover your bald head.' And, as I thought he couldn't hear me as he walked off, I said 'I thought you didn't care' he turned round and said, 'I don't.'"

Making a dream like appearance on the famous BBC Breakfast sofa, Sarah joins Bill Turnbull to help present the news.

Talking about how he keeps going during the day after his early morning start, he says, "Later in the day I have a nap, bed, pyjamas and an hour and a half, the full deal."

Revealing a particularly healthy diet that perplexes Sarah and her audience and revealing a lot more than Sarah expects about his daily routine, he says, "Every half an hour there is a little break for regional news - it's three minutes and 15 seconds - so you only have time for a certain short sort of break. If you need a longer break you need to do it before or afterwards. After a while your body gets trained to know when is the time to go. It's a matter of self discipline!"

Sarah gets into party mood with the cast of Geordie Shore and is given some lessons on the finer points of clubbing.

Sarah wonders if she'd be able to host breakfast TV and finds herself on the red sofa with Bill Turnbull.