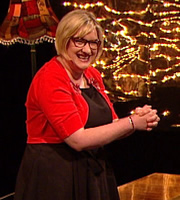 Martin Lewis, asked at what temperature the thermostat is set in his own house, he says, "Four jumpers and a big blanket and it's turned off as soon as the winter ends. But I've got a little baby now and she's more important than saving money."

Revealing he once bought a bunch of flowers for his wife for 20p at the supermarket, Martin says, "Normally when you buy flowers you take the price off but I was so proud of the bargain I left it on to show her. She was delighted, she is tighter than I am!"

Dan Cruickshank, asked what it was like to read his own obituary for his series, The Art of Dying, says, "I didn't ask to read it. You know what TV is like, it's pretty ghastly and the producer decided to have my obituary written. It was disappointingly short."

Gabriella Ellis joins Sarah to chat about Made in Chelsea. Asked how posh she actually is, she says, "We live in Chelsea so we get branded as really posh but we are the same as everyone else I like to think."

On leaving the series she says, "It was really difficult. I actually didn't tell anyone I was leaving until I announced it in the show and everyone burst into tears. It was two years of my life and it was a big part of it."

To fit in with the Chelsea set Sarah enlists the help of vocal coach Samantha Mesagno to help her speak "dead posh" with some interesting oral postures and results.

Made In Chelsea vocal coaching for Sarah

Sarah is joined by Made in Chelsea star Gabriella Ellis and vocal coach Samatha Mesagno who tries to teach Sarah how to 'talk posh'.