This time Sarah Millican is talking about medical shows and fantasy series with her special guests, Embarrassing Bodies' Dr. Christian Jessen and some of the stars of Game of Thrones.
Preview clip 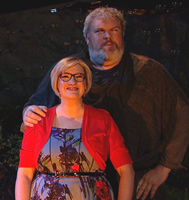 Christian Jessen, asked if he was told about sex by his parents, says, "I was given a book that I refused to read because I thought it was rude and embarrassing and then I went away to school and my friends told me about it. So I still have no idea what goes on, whatsoever!"

Asked if there is anything medical he has heard of and never seen, Christian says, "There is a condition that fascinates me that I would love to see. It's called Diphallia." Demonstrating the anatomical anomaly with his arm and hands, he adds, "You actually have two penises, one normal one and underneath, one working little one. It's amazing."

The good doctor also helps Sarah dispel some medical myths about curly hair and eating crusts and the possibility of getting pregnant from toilet seats.

Sarah joins some of the cast members of Game of Thrones - John Bradley, Finn Jones and Kristian Nairn (aka Samwell, Loras and Hodor) - to chat about the hit TV show. To prove she is trying to be a fan, she takes on the guise of Mother of Dragons to enact a scene from her own version of the show.

Sarah chats to Dr Christian Jessen from Embarrassing Bodies and gets to the bottom of a few health myths.