This week Sarah grills Noel Edmonds on Deal or No Deal and learns a trick or two from magician Pete Firman. 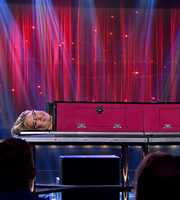 Noel Edmonds, despite a fit of the giggles, chats about Deal or No Deal. Asked why all the contestants are so chummy, he says, "We've created a very friendly atmosphere. We've had marriages and babies and one couple in the lift that didn't realise the hotel had a camera in there!"

Talking about some of the ridiculous systems contestants employ to choose the boxes, he says, "The best one without a doubt was the guy that came along and said his dog chose the numbers. When I asked him how he did this he said, 'I wrote the numbers on pieces of cheese and then noted which pieces the dog went for.' By this time we had chosen about 16 boxes and I asked him why he had stopped and he said, 'at that point the dog threw up!'"

Asked how long it takes him to get annoyed with people saying 'Deal' at him, he says, "I never get annoyed because I had 10 year of Blobby!"

Pete Firman joins Sarah for a chat. Talking about the grossest trick he has ever done, he says, "The thing I like doing is dropping a mouse in a food processor. It gets blended up and then I bring it back to life. I was in Edinburgh and half way through the trick and this lady storms the stage swearing and saying, 'how could you? That's terrible, that's so mean' and I said, 'come on, don't worry about it. It only cost three quid!'

Demonstrating a trick or two, Pete finds it particularly hard to saw Sarah in half...