Sarah Millican returns. Joining her are Strictly's Craig Revel Horwood and Spice Girl Melanie C. But how does Sarah end up performing CPR aided by the cast of Casualty?
Preview clip 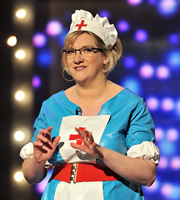 Craig Revel Horwood, chatting about Strictly and asked who was the worst dancer on the show, says: "I think that was Quentin Wilson." And, on who was worst between John Sargeant and Ann Widdicome, he says "Anne Widdicome, although she did manage to polish the floor."

Asked if he enjoys dancing at weddings, Craig says, "I hate it because I feel like I am being judged. Dancing in public has never been a good scenario for me."

Melanie Chisholm joins Sarah for a chat. Asked what it's like when Victoria Beckham smiles, Melanie says, "You must have seen her smiling. The thing is with Victoria, if you are with her in private, she's so funny and always laughing and joking and smiling."

Asked about the audition for the Spice Girls, she says, "It was weird. The first thing was on how you looked and how you moved and they were just like, 'yep, yep, no, no' and then you came back to sing." Sarah interjects, "So singing was very secondary was it?" Laughing, Melanie says, "I fell into that trap!"

Melanie won't be drawn on who she would keep or send home if the Spice Girls turned up to an audition today, but says, "We all had different strengths and tried to play to that. There were some great singers in the band, everyone can sing but some were stronger than others and some were better dancers than others. A band needs all of that and with the Spice Girls, what made us so successful was our chemistry and our energy."

Asked who of the Spice Girls has aged the best she says, "I think we are all looking pretty good actually, we are doing alright."

Asked if they ever get asked for medical advice in real life, Suzanne says, "It normally happens to me on a Saturday morning when I have popped out to the DVD store in my pyjamas and someone asks me about their bleeding piles!"

Sarah asks Mel C what the auditions for the Spice Girls were like.