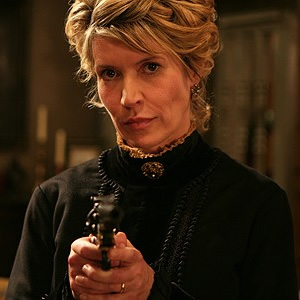 Hunderby, a seven-part scripted series set in the 1800s, will feature Davis' trademark dark comedy style. The show will be the first TV series she has created since the bleak and critically acclaimed BBC sitcom Nighty Night finished in 2005. Recently the actress has guest starred in How Not To Live Your Life, and Charlie Brooker's dark satire series Black Mirror. Other recent TV work includes creating one of the short films for Sky1's Little Crackers strand for Christmas 2010, and a role in Sky's Chekhov: Comedy Shorts (pictured).

Hunderby focuses on Helene, a shipwreck survivor washed ashore near a small English village. There she is swept off her feet by a widowed pastor and the two soon marry. As Helene moves into his home, she falls under the watchful eye of his housekeeper who is more than a little involved in her master's life, and quite obsessed with his dead first wife - to whom Helene simply does not compare.

Sky says: "In a gothic setting populated by the requisite cast of fiends, physicians, hunchbacks, wastrels, maids, crones, and an adorable puppy called Wilfred, Hunderby oozes with the dark and absurd humour that has become Julia Davis's trademark."

Full casting for the series has yet to be announced, but Davis will take the role of jealous housekeeper Dorothy. The show is due to go into production shortly, and will air on Sky Atlantic in the summer.

The series will be produced by Baby Cow, the production company behind Nighty Night, Gavin & Stacey, The Mighty Boosh, Ideal and forthcoming Sky sitcoms Starlings and Moone Boy. The production team working on the show includes Armando Iannucci as one of the executive producers, with John Rushton (The Royle Family, Early Doors) as producer and Tony Dow (Only Fools And Horses, Nighty Night) as director.

Julia Davis says: "I'm so excited to be making a series for Sky Atlantic HD, a channel that has so many of my favourite shows from around the world."

Sky comedy boss Lucy Lumsden comments: "The genius of Julia Davis comes to Sky Atlantic HD. Her sick and twisted sense of humour has found its natural home and we can't wait to unleash it onto our customers later this year."

This news is the latest in a long-line of new commissions from Sky as it significantly increases its investment in home-grown comedy to air on both Sky1 and the more niche Sky Atlantic sister station. Other recent commissions for Sky Atlantic include Kathy Burke's Walking And Talking, and a second series of surreal comedy show This Is Jinsy.

As reported earlier in the month, the channel is also developing a new format with Jack Dee called Don't Sit In The Front Row. 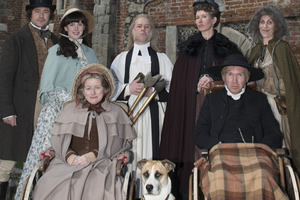