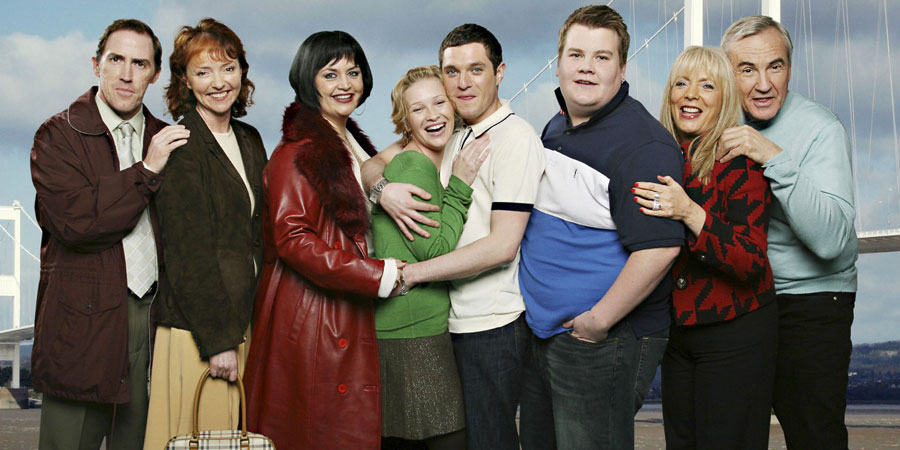 A critic-pleasing, gentle and warm comedy about the romance between an Essex lad and Welsh girl

Stacey is from Barry, near Cardiff, and Gavin is from Essex. But the difference in backgrounds and culture doesn't hinder their romance, which flourishes when they finally meet for the first time after hitting it off during numerous flirtatious work calls.

Stacey's guardian-uncle, Bryn, has pledged to look out for his niece - when not obsessing over his faulty satellite navigation system - whilst Gavin is doted on by his sometimes emotionally volatile mother, Pam, who only wants the best for her "little prince".

On the occasionally rocky route to Gavin and Stacey's wedding, the two very different sets of families and friends must learn to get along together. The couple's best friends, the forthright Nessa and best man Smithy, get along very well together too, but unfortunately only when they're drunk.

In Series 2, the honeymoon is over for the newlyweds as their married life begins in earnest at the Shipman family home in Essex. But, as the reality of living so far away sinks in, Stacey starts missing her home in Barry Island along with her mum and her Uncle Bryn. Meanwhile, Smithy and Nessa are coming to terms with their own stark reality: they're not even friends and yet they're having a baby together.

In Series 3, the couple move to Barry Island, which means big changes for both families. Pam and Mick have to adjust to an empty nest while Gwen's got a full house again. Stacey is in her element, but will this finally be the solution to the couple's long-distance problem? And how will Gavin take to living in Wales?

Smithy questions their friendship along with his own role as father - and with Dave Coaches on the scene and now engaged to Nessa, will Smithy find himself pushed out of the frame? How will life in a caravan work out for Nessa and her soon-to-be husband Dave?