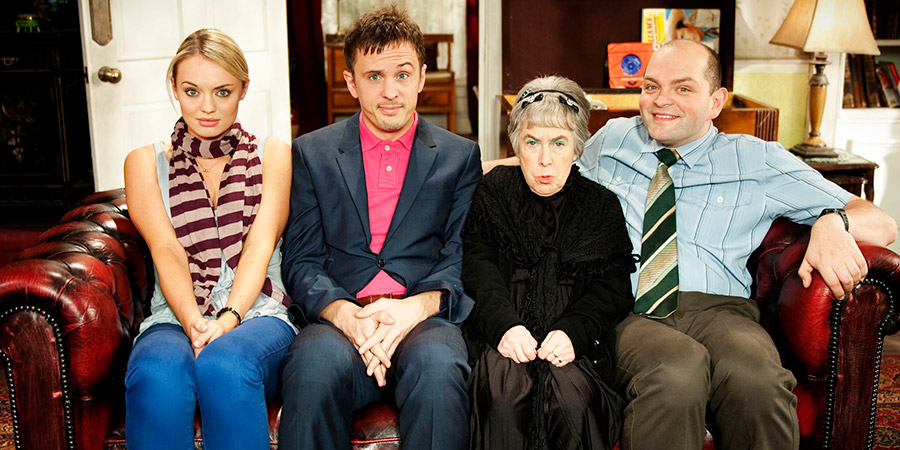 How Not To Live Your Life

Sitcom about an arrogant single twenty-something man who is struggling to navigate his way through life. He is not helped by his bad instincts

Don is a neurotic, single twenty-something failing to navigate his way through the very basics of life. His biggest enemy is his overactive mind, which plays out countless scenes of things he shouldn't do or say.

When Don moves into a house left to him by his recently deceased grandmother, he meets Eddie - his Nan's over-enthusiastic carer who doesn't want to leave. Don soon realises there are advantages to letting him stay.

To help pay off the huge back payments on the house, Don decides to get a lodger. He ends up choosing Abby, the girl he was in love with as a teenager and still fancies. The trouble is Abby isn't single - she has a snobby boyfriend called Karl.

Having become close to winning the heart of his ideal woman, Abby, in the last series, Don suddenly finds himself bereft at the start of Series 2. Oblivious and newly single, Abby has opted for six months travelling to get over her ex-boyfriend - leaving Don with both a void in his life and a spare room to fill.

Luckily, Don has Eddie to cater to his every need, which includes helping in his search for a new lodger. Eddie used to be Don's nan's carer but happily transferred his duties to taking care of Don, who inherited his nan's house.

From cooking and cleaning to cutting up his food, scrubbing his back and wiping his nose, among other things, no task is too great or small for Eddie and he's the closest thing Don has to a friend.

To make matters worse, Eddie has taken on Mrs Treacher, Don's elderly neighbour, who has become more eccentric than ever since her husband passed away. Eddie brings her everywhere with him - much to Don's dismay.

Don, however, soon realises that Abby might return from her travels still single and ready for him to waltz back into her affections. So this could be his last chance to play the field, plus it will earn him some extra cash. It's just up to Don and Eddie to decide who gets the spare room.

At the climax of Series 2 Don's luck was about to change as it looked like he was finally going to get it on with his flatmate, Sam. But on joining Don at the start of Series 3, it appears that things didn't quite go according to plan, and each day is a trial for Don as he must face up to the fact that he blew his chance with Sam.

To make matters worse, she has a new boyfriend who is everything Don isn't - mature, reliable, clever and not at all self-obsessed. Once more Don has to deal with a fraught love life that involves dates with an aristocrat, a tramp and a really angry woman. On top of that he is sucked into taking part in Top Gun - The Musical, tries therapy and even sells his soul to become a corporate highflyer. But despite all this, he is still no wiser as to how to live his life...