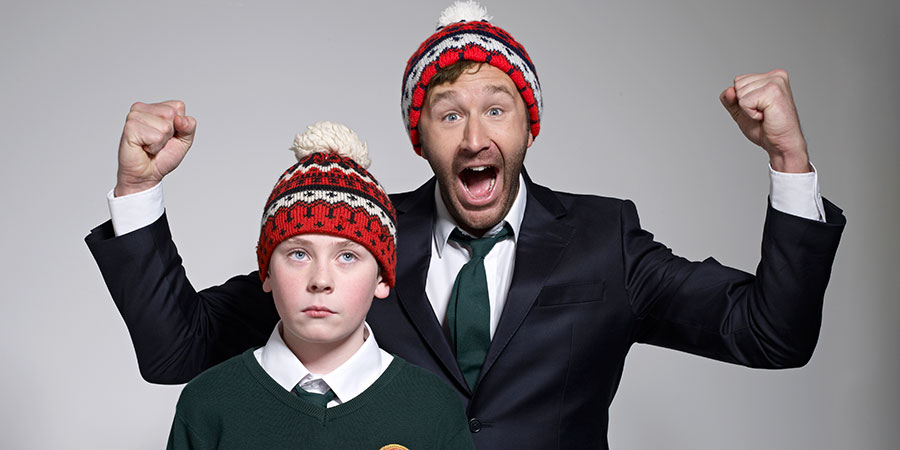 Inspired by his Little Crackers 2010 short Capturing Santa, Moone Boy is a semi-autobiographical sitcom written by and co-starring The IT Crowd's Chris O'Dowd about a boy growing up in Ireland in the 1980s.

O'Dowd plays Sean, the imaginary friend of 11-year-old Martin Moone, the youngest child of a family living in a small town in Ireland.

Martin has a unique perspective on life aided by an imaginary friend. His imagination comes into play both in his childish drawings, which come alive through animation, and in the ridiculous schemes he comes up with, against Sean's better judgement. With Sean's help, Martin negotiates life as the youngest in a chaotic, scatter-brained family.

In Series 2, the story of Martin Moone picks up as Martin begins life at secondary school and also steps into the 1990s, taking in all the excitement of the new decade as Italia '90 and Jack Charlton's Army provide a thrilling backdrop.

Martin, the youngest of the scatter-brained Moone family, continues to let his imagination run wild both in his childish drawings, which come alive through animation, and in the ridiculous schemes he comes up with, against imaginary friend Sean Murphy's better judgement.

Series 3 is set in the 1990s. In no hurry to grow up, Martin Moone and his imaginary pal Sean Murphy, plus best mate Padraic, enjoy a fresh batch of escapades, from becoming door-to-door salesman and hunting for UFOs to wrangling pet donkey Donkey Kong. The Moone household, meanwhile, is at bursting point following the addition of Dessie and baby Rose to the chaotic brood.