Domestic life is far from quiet for the residents of Manchester's Mount Pleasant. Lisa and Dan are stronger than ever, despite the presence of Tanya, the temptress next door.
Preview clips 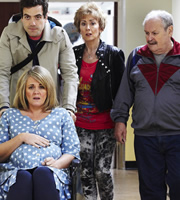 Series 3 was full of ups and downs for the locals, especially for Lisa and Dan, who were rocked by Dan's fling with neighbour Tanya. Against the odds, Pauline and Charlie finally made it down the aisle, and Lisa reconciled with Dan, announcing that she was expecting their first child.

New arrivals and fresh challenges mean that life is far from simple for the residents this series. Lisa and Dan eagerly await the arrival of their baby, but tantrums and drama are already in full flow - and that's just Dan. The unexpected homecoming of his wayward brother Robbie raises a red flag, whereas everyone else is positively giddy about his return.

Elsewhere, Greg is released from prison following his mix-up with a drug ring and Denise sees her modelling career take off in a big way.

Fergus is reluctant to support her, until the local paper wants to include him in a feature about her success, that is. Bianca and Roger, meanwhile, do their best to keep Gary's spirits up after he gets disappointing A-level results, and Bradley fears his family's past may be finally catching up with them.

The gang are all given a welcome distraction from their personal problems, however, when Lisa goes into labour a week early and a chaotic dash to the hospital ensues.

Sally Lindsay and Daniel Ryan reprise their roles as Lisa and Dan Johnson. Their lives are about to be turned upside down.

Dan is trying to make sure heavily pregnant Lisa takes it easy.