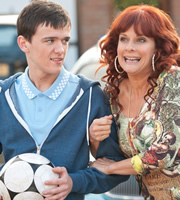 Everything is rosy for Lisa and Dan. Unfortunately the same can't be said for the rest of the gang; Shelley and Greg are trying to live separate lives, while Denise attempts to keep Fergus away from baby Joshua. Meanwhile, Bianca goes into mum mode when her teenage stepson Gary moves in.

With an important football game on TV, everyone heads over to the Johnsons' where Sue is putting on one of her famous spreads and there's excitement in the air. Lisa has other ideas, however, when she's led astray by her new friend Kim.

Have you ever seen a bigger blower?