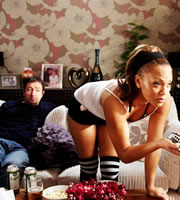 As Lisa and Dan's 10th wedding anniversary approaches, she's convinced he'll have forgotten. That is, if she's not talked him into an affair with a neighbour. Meanwhile, Shelley's marriage is on the rocks - who'd have a best friend for a boss?
Preview clips

A preview clip from Sky1 comedy drama Mount Pleasant. Bianca comes to the door to flirt with Dan.

Dan finds himself in every man's nightmare when he's asked to rate Denise on a scale of 1-10...