While Dan grows jealous of Lisa's friendship with Kim, the residents must pull together when tragedy strikes. Plus, Pauline receives a blast from the past. 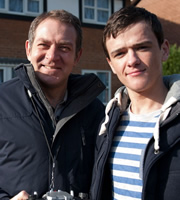 Lisa's growing friendship with Kim threatens to cause trouble in her marriage as Dan grows increasingly jealous of the time the girls are spending together. Denise also has problems to deal with when she struggles to leave baby Joshua and return to work. In the office, she also faces Fergus's requests for access to their son.

Sue's joy at speaking to her sister Pam in Spain gets her thinking, but there's bad news for Sue and Barry when they learn of the closure of their beloved ice rink. And as Bianca tries to encourage Jim to spend more time with her and Gary, it seems he'd rather be in the company of his model planes.

Meanwhile, the Mount Pleasant residents must pull together when tragedy strikes, and Lisa and Dan are less than impressed to see the return of a familiar face. Plus, Pauline is knocked for six by a blast from the past.