Dan has a bee in his bonnet about why Robbie left an apparently perfect life in the Big Apple for suburban Manchester. 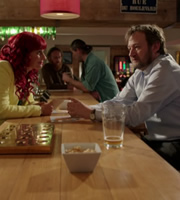 Becoming a grandfather has put the spring back in Barry's step, but what's going on with Lisa? Although maternity leave should alleviate the stress of work, she's having trouble switching off her career brain and getting into mummy mode.

Dan, meanwhile, has a bee in his bonnet about why Robbie left an apparently perfect life in the Big Apple for suburban Manchester.

Over the road, a call from a disgruntled former business partner sends Bradley into a panic, culminating in a proposition for newly-paroled Greg.

While Greg considers a dubious career move, Fergus signs his own death warrant by hiring a PA behind Lisa's back. Gary's prospects, however, take a positive turn with an invitation to try out for a professional football club.

As for Bianca, she is at risk of exploding when BFF Roger agrees to move in - mice have taken up residency in the vicarage, leaving him with no option but to take refuge in Bianca's (very pink) spare room and submit his patience to the ultimate endurance test.