Bianca discovers a knack for giving advice when she has to play unlikely counsellor to one of Roger's troubled parishioners. 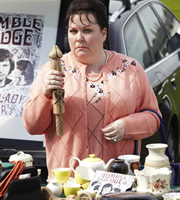 As war continues to rage in the Fersa office, Lisa plays hardball to prove Angie (aka 'the Cruella de Vil of Salford') isn't all she's cracked up to be. Sadly, she's waging a one-woman fight, what with Fergus preoccupied with covering up his huge loss of company money on the stock market.

Greg's also feeling the pressure when he spots someone watching Tanya's house, forcing him to come clean about the danger she and Ella could be in. The group hotfoot it to a secure location, making it the right time for Ella to learn once and for all the real reason behind her family's life on the lam.

While Tanya and Ella have their first open and honest conversation, Dan struggles to bite his tongue during an exasperating trip to a car boot sale with Barry, Pauline and Robbie.

Dan and Lisa are competing to see who can have the worst day, and when Pauline's secret agenda comes to light, it looks like Dan could triumph. If only the unhappy shopper had someone to vent to, such as Bianca, who discovers a knack for giving advice when she has to play unlikely counsellor to one of Roger's troubled parishioners.