Tanya and Ella try to get their heads around Bradley's web of lies. 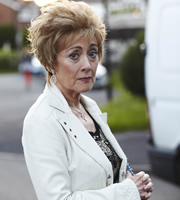 It's often said the way to a man's heart is through his stomach, so Lisa wants to throw a dinner party to foster harmony between the Johnson brothers, but the night takes an unsavoury turn long before any food is served.

When Greg lets slip that the shady figures lingering around Mount Pleasant were looking for Robbie, Dan plays detective to find out the truth about his brother's exploits. Blissfully unaware that things are about to explode, the man in question tries to convince Bianca to be his date for the evening.

Events gather pace at Denise's house as well when Fergus tries to right a few wrongs. Realising that his pride has been eating away at their relationship, Fergus decides to make a grand gesture to set them on course for a brighter future.

The world doesn't look quite so sunny at the Dawsons', though, as Tanya and Ella try to get their heads around Bradley's web of lies. Greg decides to stick around because they're by no means out of the red, but Tanya has mixed feelings about his presence.