Bird is so fed up of Nick going on about Mary that she decides to take action, but the result is not quite what she planned.
Preview clips 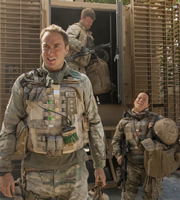 Simon tries to prove himself at first-person shooter computer game Metal Patrol 3, after teasing from Mac and Rocket, but his late night practising starts to mess with his head.

Faruq was credited in this episode but did not appear.

Rocket launcher? At that range?

The Editor of Sexy Times

Nick realises he may have missed his chance with Mary.