After Bluestone 42 join a midnight raid on a bomb factory and rescue a kidnapped Danish aid worker, they find more than they bargained for. Simon tries to get a book deal for his memoir.
Preview clips 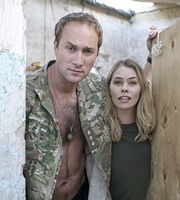 Mac and Rocket are gutted when a football game between their beloved Hibs and Celtic is interrupted with news of an impending bomb factory raid.

During the raid, the team rescues a Danish Aid Worker, Astrid (Birgitte Hjort Sorensen) who has been taken hostage by the Taliban.

Astrid is delighted and soon develops a crush on Nick. Will Nick be able to resist Astrid's charms, despite wanting to prove to Mary he is interested in more than just one thing?

Meanwhile, Simon has written a memoir entitled A Foot In Death's Door, much to the team's amusement. He forces Mary to read it for him, but can she spare his feelings when he asks her for an honest opinion?

The rest of the team find 'A Foot in Death's Door' by Lance Corporal Simon Lansley.

Simon really wants a book deal, but before he can get a book he needs the perfect 'look'.