During a major operation, Nick is called in to rescue a squaddie who has trapped his helmet in an IED tripwire.
Preview clips 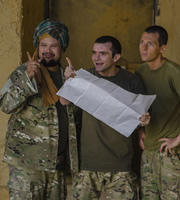 Nick is called in to rescue a squaddie who has trapped his helmet in an IED tripwire.

As the squaddie panics, Nick realises this may not be straightforward and things take a worrying turn. With the help of Bird, Towerblock has to overcome his own fears and prejudices in order to uncover exactly what happened during the operation and Simon makes a life-changing discovery.

Meanwhile, the Lt Col has arranged a base pub quiz, and sends Mac and Rocket on a wild goose chase to try and cheat their way to victory.

The Lt Colonel displays some impressive skills while keeping Bluestone 42 on their toes.

Oliver Chris talks about his departure from the show.