Nick regrets showing off to his new number 2, Towerblock. Simon and Bird come to blows over a special book belonging to the Lt Colonel.
Preview clips 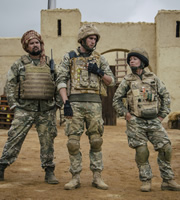 Nick's new number two, Corporal Gordon House (aka Towerblock), has been deployed to Afghanistan with a smart new pistol: the Glock 17.

Nick then feels he must prove to Towerblock he can pass a weapons-handling test and get himself one. Unfortunately, he's too proud to do the training, and the test does not go as planned.

Simon tries to gain the respect of others by studying Sun Tzu's Art Of War, landing Bird in trouble when she is drawn into his obsession. Meanwhile, Mac comes up with a novel way to prove he is the filthiest inhabitant of Patrol Base Frost.

Base camp, bombs and banter... Series 2 of Bluestone 42 starts soon.

My gun's cooler than your gun

Nick and Towerblock face-off over the Glock 17 pistol.

The Art of War

The Lieutenant Colonel has some sound advice for Simon to help him get promoted.