Bluestone 42's new robot is brazenly stolen from under their noses, which proves surpassingly useful in Nick's hunt for the Taliban bomber. 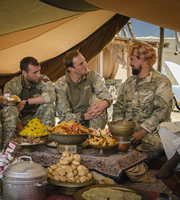 Graham, the new robot, is brazenly stolen from under the noses of Bluestone 42, which proves surpassingly useful in Nick's hunt for the Taliban bomber.

Bird finds herself the reluctant participant in a 'girlie chat' as Mary battles with her feelings for Nick. Meanwhile, Simon loses a key part of his rifle and his lack of trust in Mac and Rocket comes back to bite him.