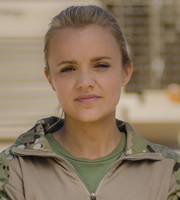 Ellen Best is a high-threat-bomb disposal expert who couldn't be less like the rest of the unit if she tried.

She is organised, does everything by the book, and catches Simon's eye immediately. Bird, on the other hand... 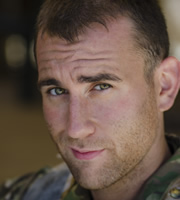 Bluestone 42's second-in-command knows his stuff and isn't afraid to say so.

Working class and fresh out of training, this new recruit has a massive classist chip on his shoulder. A couple of days out in the field quickly show him the true meaning of 'us' and 'them'.

A butcher's son from Armley, he's proud of his Yorkshire heritage. He's into machinery and stuff that goes bang. 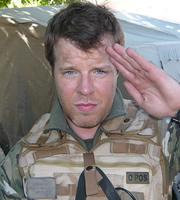 Lance Corporal Simon Lansley has one job: to protect Nick, the bomb guy. He's good at that. But he has bigger ambitions: to apply to Sandhurst and become an officer. But he is 'not officer material' according to his regiment.

His dealings with Mac and Rocket show he doesn't have the social or leadership skills for that sort of promotion. This hasn't stopped him doing tons of courses to try to look good. If there was a course in underwater knife fighting, he'd be in a wetsuit like a shot.

Previously engaged but now single, he lives in Braintree. 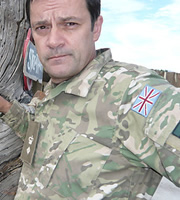 Lieutenant Colonel Philip Smith has been to more places and seen more things than he would care to remember.

As the commander of the entire Battlegroup, he's based at a nearby Forward Operating Base, but somehow he's never far away when he's required. Or when he's definitely not required. As he reaches the end of his career in the Army, he has realised that he can conduct himself however he likes. So he does. 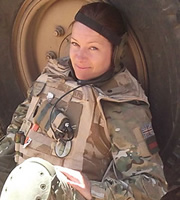 Corporal Lynda Bird (aka Bird), the ECM (Electronic Counter Measures) operator, just wants to be one of the lads. And she pretty much is - she can go toe-to-toe with the rest of her team when it comes to swearing or fighting.

Sharp-tongued and full of common sense, she doesn't suffer fools gladly, which is a pity given her close proximity to so many. From Portsmouth, joining the Army was a small rebellion. Against joining the Navy. 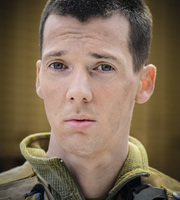 Private Euan Armstrong (aka Rocket) is from Pilton, Edinburgh.

He looks up to Mac and, as Rocket is not the sharpest bayonet in the drawer, Mac constantly takes advantage of this. He lives with his hot mum and his big brother back home. He left school at sixteen and joined the Army on the basis that you get free food and a gun - what's not to like? 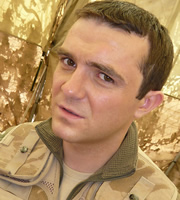 Private Kevin McDowell (aka Mac) is from the East End of Glasgow. He has an encyclopaedic knowledge of filth and nonsense.

Mac is smarter than he's often given credit for, even though he doesn't know when to keep his mouth shut. He and Rocket are tasked to protect Nick as he's such a high-value asset. 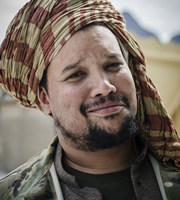 Faruq is the unit's interpreter and local fixer. Nobody knows his last name - and they're not even sure he's actually called Faruq.

He's a survivor, always keen to please whoever he's talking to and ideally sell them something for a good price that will turn out to be bootlegged or broken. No refunds! 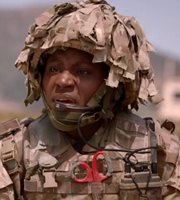 Jasmine is the no-nonsense Medic operating out of the base. Nothing seems to phase her.

She'll tell you direct what is wrong with you - no mucking about trying to sugar-coat the problem. 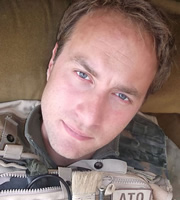 Captain Nick Medhurst, ATO, is the wise-cracking bomb disposal expert who does the long walk.

Once you've stared at a few dozen IEDs, you have to work fairly hard to get your kicks so he's always looking for new things and new experiences. Hence his inability to settle down with one woman, and his love of gourmet food and fine booze.

Mary, however, he's got more than just a little bit of a thing for. But is Nick really ready for a relationship? Forced to leave the service after losing a leg in an explosion, he could now be about to find out. 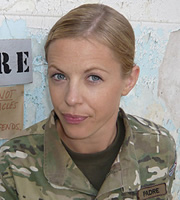 Mary is the padre from a small Lincolnshire village who's desperate to do a good job, fit in and keep up with the banter, but is pretty sure she's failing at every turn. She's actually doing fine, although no-one's going to tell her that.

She gives Bluestone 42 a lot of her time, mainly because she enjoys the attention from Nick, who's tall, good-looking and brave. But he's not really looking for the same thing that she is - is he?

Having given in to their desires, Mary requests an urgent transfer away from Bluestone 42. Has Nick lost her forever? 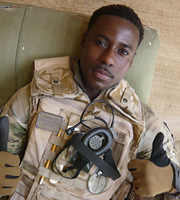 He just wanted to do a good job, and regularly succeeded in this as he's diligent and smart - well, smart in that he can remember stuff. Lots of stuff. He knows which snack bar comes with which ration pack - and all the allowable two letter words in Scrabble. He's not so smart in knowing when to say what he knows. And so he was often on the receiving end of Nick's withering sarcasm, but bounced back fast.