As the team prepare to leave Afghanistan for good, Simon receives some devastating news.
Preview clips 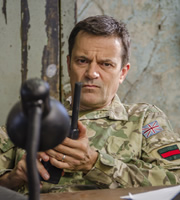 It's the last day on base before the drawdown. Mac and Rocket are determined to steal as many 'souvenirs' as possible, while Towerblock's efforts to help mend Bird's broken family ties cause his wife to jump to alarming conclusions.

Ellen is torn between rigid adherence to rules and desperation to be accepted as 'one of the guys', leading her to set up a questionable competition.

Simon receives some devastating news but focuses himself on their final callout to perform an awesome act of heroism. When the team return they make a terrible discovery.

Ellen tries to have a heart to heart with Simon.

A table has just opened up for the Colonel in an exclusive restaurant.