The Bluestone 42 team are called out on routine ops with their CIA liaison officer Carter, where things take a drastic turn. Back at base, Nick takes an instant shine to the new padre. How will she react?
Preview clips 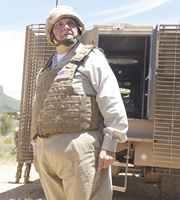 The Bluestone 42 team are called out on routine ops with their CIA liaison officer Carter (Michael McShane), where things take a drastic turn.

Back at base, they are introduced to Mary (Kelly Adams), the new padre, who Nick (Oliver Chris), the Ammunition Technical Officer, takes an instant shine to. How will she react to his advances?

Meanwhile, Simon (Stephen Wight) grapples with Millsy (Gary Carr) over the report that Nick has forced him to write on his behalf, and the young Privates - Mac (Jamie Quinn) and Rocket (Scott Hoatson) - enjoy winding up Bird (Katie Lyons) who may or may not have named the bomb seeking robot 'Arthur'.

The trailer for the new comedy about an army bomb disposal team.

Turns out it wasn't an IED, it was just a walkman.

Get a feel for the new show in this promo.

You can't fancy the Padre!

Mac and Rocket grill Nick about his attraction to Mary, the new chaplain.

Nick visits Mary to check that she is ok - but his timing is suspicious.

The story of Bird and Arthur's relationship, from happy times to tragedy.