It's Christmas Eve and the team are joined by Nick's new number two, Corporal Gordon House aka Towerblock. Having finished top of the class he thinks he knows it all, but things are quite different out in the field.
Preview clips 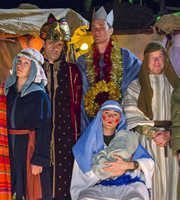 It's Christmas Eve and the team are joined by Nick's new number two, Corporal Gordon House, aka Towerblock, on his first tour of duty.

Captain Nick Medhurst is tasked with getting him up to speed, but as Towerblock finished top of his class on the High Threat Course, he thinks he knows it all. He soon finds out things are different in the field, even on Christmas Day. The Taliban don't stop for Christmas and it's up to Nick to pull the team together.

Originally scheduled to premiere on Monday 23rd December 2013 at 10pm, this episode was postponed due to the death of a soldier on the same day.

The team introduce Corporal House to a not entirely safe Christmas game.

Simon tries to spread some Christmas cheer throughout the camp.