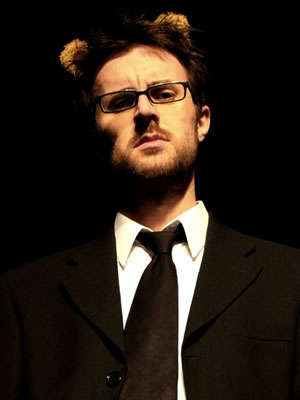 Manchester-based Michael J Dolan, who was one of the semi-finalists in this year's 'BBC New Comedy Awards', says he has the shortest joke at this year's festival. He explains more:

One of the most overused of the tiny stockpile of go-to moronic taunts used by the average drunken heckler is "tell us a joke." As heckles go this, more than any other, indicates that the heckler's function within the gig is completely over. It displays a magnificent and total lack of understanding of the most basic mechanics of contemporary stand-up comedy and singles you out as a failure of an audience member. If you ever feel the need to shout "tell us a joke" at a comedian then you are no longer useful to the gig and it is almost certainly time for you to go home. Your ability to process your chosen form of entertainment has drawn to a close for the evening and you should definitely do the same.

A certain contingent still, incredibly, seem to believe that a joke has to conform to a traditional and recognisable format in order to qualify itself. An Englishman, a Scotsman and an Irishman. Two blokes walk into a pub. What do you call a man with a thing on his thing, and so on. The jokes of the playground. But if you set foot in any stand-up comedy show in Edinburgh right now, or see any major touring comedian's latest show or DVD you won't hear jokes in this format. Things have moved on. It hasn't been like that since the 1970s. You should not think, however, for a second that you are not hearing jokes. The most seemingly garrulous of stand-ups is, whether you recognise it or not, telling jokes. They are still very much in the business of setups and punchlines. Even the venerated gagsmiths of the circuit, the Milton Joneses and Gary Delaneys of our world, steadily and repeatedly redefine how jokes are told, if not constructed.

I have never been a 'joke writer' in any traditional sense. I have always been drawn to those who hide the mechanics of their work in a more conversational style. Much like a magic act I feel that a comedian's routines lose a little indefinable something once the audience can see how it all works. I have, however, for my show at this year's Fringe constructed what I believe to be the shortest joke at the festival. It encapsulates how setups and punchlines need not conform to any pre-conceived format. It is a joke which sets itself up with a single word and then punches its own line with a second. It is probably Earth's Shortest Joke. Here goes.

There. That's my joke. Sure, it isn't the greatest joke in the world (heaven knows, there are plenty of those in my show Dress to Depress at 6.10pm, The White Horse, Canongate, 4th-28th August) it's possibly even a little disappointing as jokes go but it is definitely a joke and f*** me if it isn't the shortest.