The Garvey's get a bit of a shock when they discover that Mel's debt has been taken on by some gangsters. They find themselves attempting a very risky bet to pay off what they owe. 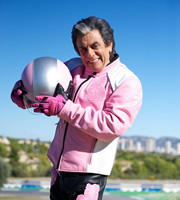 It's all go at The Solana as Mateo prepares for his first water aerobics class. However, when Donald takes a funny turn in the pool, Mateo finds himself in a spot of bother with the boss and is forced to ask Les/Lesley to help him out.

The Garvey's get a bit of a shock when they are approached by some gangsters by the pool who tells them that they have taken on Mel's debt. The Garveys find themselves in a make or break situation as they attempt a very risky bet to pay off what they owe.

Noreen's problems with Pauline continue - she's decided she wants to leave Benidorm early. Meanwhile, Liam is still stuck to Natalie's side, much to the annoyance of Sam.

Gavin, who's grown increasingly annoyed by Kenneth's freeloading is becoming extremely suspicious of him. Having arrived in Benidorm with no money he now seems to have rather a lot of it...