As the series begins, the Solana staff are suffering pay cuts and the Garveys think Madge has a stalker. 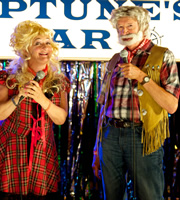 The Solana staff are angry, as everyone's being given a pay cut. Tiger Dyke is angry too - his cards and cash have been stolen, so he's relying on his Dad.

The Garveys are worried Madge is being stalked, while Jacqueline is holidaying without Donald: they've arranged a wife swap to mark their wedding anniversary so she arrives with Glynn.