Everybody's back at the Solanas for more sun, sangria and swinging - including Madge's new boyfriend Mel, Didsbury's answer to Julio Iglesias. 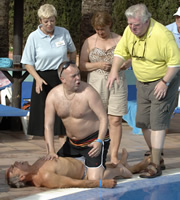 Once again the Solana, Benidorm's premier all inclusive resort, plays host to its usual mix of holidaymakers all looking for sun, sea and savings - although not all of our regulars planned on being there...

Kate and Martin have gone to a nearby picturesque village but find more than a chocolate on the pillow in their room - Donald and Jacqueline have been using the room for some 'interesting' adult activities.

The Garveys holiday doesn't get off to the best of starts when Mel's diving competition with The Oracle leads to a near fatal accident.

Gavin and Troy arrive at the hotel to scenes of complete chaos - Mick is trying to revive a knocked-out Mel, The Oracle is arguing and Michael is choking.