Janice tries to convince Madge not to agree to a wed a man they have only known for five minutes. Meanwhile an arm-wrestling match organised by The Oracle and his mum turns into Fight Club, offering some a chance to settle old scores. 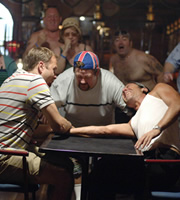 Mel's proposal to Madge is the talk of the resort. Janice tries to convince the bride-to-be not to agree to marry a man they have only known for five minutes. After all, for all they know he could be a mass-murderer!

Kate encounters Mateo again but after telling him that last year's traumatic affair was simply a moment of madness it becomes clear that Mateo doesn't actually remember her.

Later an arm-wrestling match organised by The Oracle and his mum turns into Fight Club with a chance for some to settle old scores. Martin beats Mateo in the contest.