Everything seems to be going wrong as the families return for another break in the Spanish sun. Joyce is refusing rooms, Kenneth receives strange messages, and the Garveys don't even leave the airport without problems! 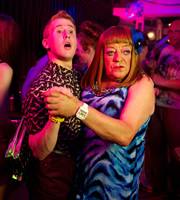 The Garveys only get as far as Alicante airport before their holiday starts to go wrong.

Donald and Jacqueline stage a protest when Joyce Temple Savage refuses to give them a room.

Kenneth is terrified by strange messages he's been receiving at Blow n' Go, until Liam and Lesley intervene.