Noreen checks in at The Solana with her irritable daughter Pauline. Sam, Natalie and Liam hit a nightclub; and Mateo tries to get Les/Lesley fired. 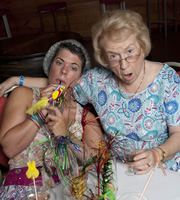 It's check in time at The Solana for Noreen who has brought her irritable daughter Pauline along. Pauline has spent the past few years in South Africa with her husband but is now going through a messy divorce.

There's trouble in store for Sam and Natalie as they hit a nightclub with Liam and mayhem ensues.

Les/Lesley on the other hand is settling in fine at the pool bar but his/her efficiency is getting on Mateo's nerves and he hatches a plan to try to get rid of Les.

To take their mind off of Madge's financial woes, the Garveys decide to head to a water park, and when Noreen and Pauline show up, events take a bit of an unexpected turn.

In an effort to raise Madge's spirits Donald and Jacqueline decide to have a whip round to help her back on to her feet. But, in true Madge Harvey style, she's not entirely appreciative of their efforts.