A freak storm batters Benidorm and Les/Lesley has to arrange some bingo entertainment with rather unusual prizes. 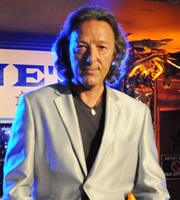 As a freak storm batters Benidorm, Pauline is on bad form as her planned early flight home has been cancelled. It's not long before the reformed alcoholic decides that a drink might help ease her frustration.

Meanwhile Les/Lesley has arranged some bingo as entertainment. But when it doesn't quite go to plan he's forced to pull in some unusual prizes to offer.

When a handsome stranger from Janice's past Johnny Neptune appears at The Solana, Janice is thrown into a bit of a panic. She's even too distracted to notice that Michael may be about to get his first taste of holiday romance.

Poor Natalie is still having man trouble. She's now having to juggle the attention of both Liam and Mateo. Liam is determined not to give up in his pursuit of her and neither is Mateo. What will she do?

And there's some bad news from Donald as he reveals that his health situation may be a little more serious than he originally thought.