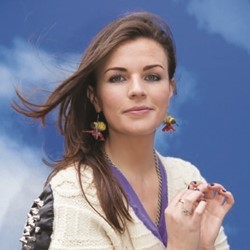 British Comedy Award winner for Best Female TV Comic 2015, Foster's Best Newcomer nominee 2013 and avid avocado enthusiast Aisling Bea debuts her new show which, in March, was loosely supposed to be about childhood dreams, death, confidence and success. As seen on Live At The Apollo, 8 Out of Ten Cats, Channel 4's Comedy Gala, QI, Would I Lie To You, Delivery Man and Cardinal Burns. '...she's got being funny in the bag **** (Guardian). '...a masterclass in high impact entertainment' ***** (Evening Standard). 'You'll enjoy it, if she's your thing (Her Mother).

British Comedy Award winner and star of Live at the Apollo, Channel 4's Comedy Gala and 8 Out of 10 Cats Aisling Bea returns to the Edinburgh Fringe with brand new show Plan Bea.

Enlisting more yarns from her upbringing in Ireland, Aisling will explore childhood dreams, death, confidence and success - all the themes anybody that saw the climax of her debut show would expect her to be tackling.

Aisling has rich heritage at the Fringe, winning the prestigious So You Think You're Funny? competition in 2012 and being nominated as Best Newcomer in the Foster's Edinburgh Comedy Awards 2013 for her debut show C'est la Bea. London's Evening Standard has described her as 'a masterclass in high impact entertainment', The Guardian said 'she's got being funny in the bag' whilst her mother said 'you'll enjoy it, if she's your thing'.

She has appeared on Live at the Apollo, Channel 4's Comedy Gala, QI, 8 Out of 10 Cats, A League of Their Own and Russell Howard's Good News. During the 2015 general election, she was part of Channel 4's Alternative Election Night alongside Jeremy Paxman and David Mitchell. As well as stand-up, Aisling is a trained actress and has appeared in ITV's acclaimed dramas The Town and Lewis, as well as comedy series Cardinal Burns, Dead Boss and The Delivery Man. Aisling also co-wrote award-winning BBC Radio 4 series Irish Micks and Legends with Yasmine Akram.