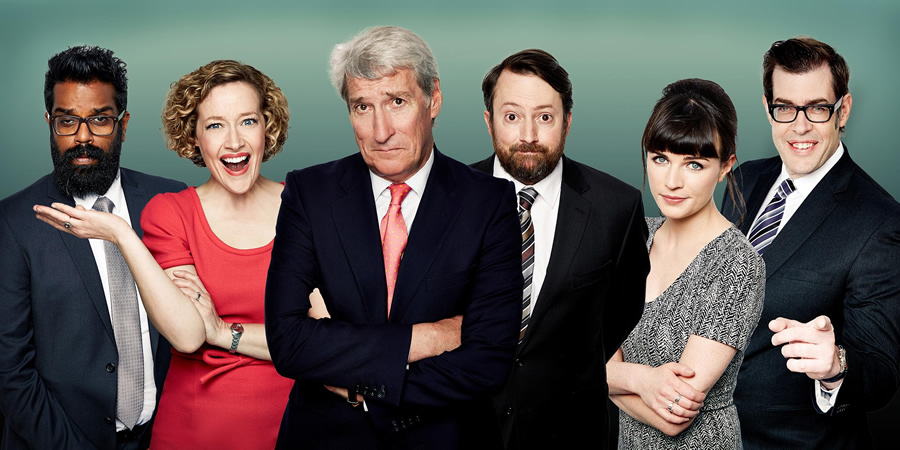 Channel 4's Alternative Election Night, filmed in front of a studio audience, aims to bring viewers the results from the General Election in an entertaining way.

Heading up this ambitious live show was hosts Jimmy Carr, David Mitchell and Lauren Laverne. Joining them in the studio was Charlie Brooker, plus a range comedians, pundits, political commentators and even an in-studio bookmaker.

The early election results were covered as they came in, plus there were politics-themed pre-recorded specials of Fonejacker, You Have Been Watching and Come Dine With Me.

Channel 4 described the programming as "a provocative, cerebral and entertaining take on all things election, featuring discussion, specially recorded segments and audience reaction".

Jeremy Paxman and David Mitchell presided over the evening's programming and were joined by a host of guests in the studio and around the country with their take on the unfolding story. Richard Osman was on hand to provide his interpretation of events, with Gary Gibbon and Cathy Newman providing hard-edged commentary on the political story. The Channel 4 News reporting team were on the ground in key electoral battlegrounds, reporting right through the night and bringing the latest news and results.

Jeremy Paxman, David Mitchell and Richard Osman were joined by a host of guests in the studio and around the country with their take on the unfolding story. Jeremy presided over round table debates providing hard-edged commentary on the political story. Richard Osman and David Mitchell were on hand to provide their own incisively funny interpretation of events, with additional analysis from Channel 4 News presenters Cathy Newman and Gary Gibbon joining in the studio.

The next show is expected to be fronted by Krishnan Guru-Murthy, Rylan Clark-Neal and Katherine Ryan.