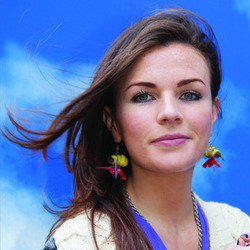 Highly anticipated debut stand-up show from Irish comedian and winner of So You Think You're Funny? 2012. Featuring joke filled tales of life, death, hip-hop, raving and riding. The Independent's "One To Watch", an Amused Moose semi-finalist, as seen on Jack Dee's Don't Sit In The Front Row (Sky), Dead Boss (BBC3), Cardinal Burns (E4) and Russell Howard's Good News (BBC3). 'Already making waves on TV as an actor ... Bea's certainly got an eye for a good gag that could lead to a very promising stand-up career' (Guardian). 'Er... Please come.' (Aisling herself).

2012 Foster's So You Think You're Funny? winner Aisling Bea, as seen in Dead Boss (BBC Three), Russell Howard's Good News (BBC Three) and the BAFTA nominated Cardinal Burns (E4), brings her debut show C'est La Bea to the Edinburgh Fringe. Aisling has quickly established herself as one of the finest young comics on the circuit. At the Edinburgh Fringe 2012 she became the first woman for 20 years to win the coveted Foster's So You Think You're Funny? title, joining previous winners including Dylan Moran, David O'Doherty, Tommy Tiernan and Peter Kay. She has since been invited to perform around the world at the Montreal Festival, The Cat Laughs Comedy Festival and Latitude among others.

She already boasts an impressive array of TV credits including Dead Boss (BBC Three), Cardinal Burns (E4), Come Fly With Me (BBC One), Russell Howard's Good News (BBC Three), Don't Sit on the Front Row (Sky Atlantic) and FIT (CBBC). She has a degree from LAMDA in classical acting, and appeared in acclaimed ITV drama The Town in late 2012 alongside Andrew Scott and Martin Clunes. Other TV credits include popular Irish sketch show The Savage Eye (RTE), Trivia (RTE) and Lewis (ITV), whilst she appeared in Phil Nichol's play The Intervention at the Edinburgh Fringe 2012.

Aisling is also an acclaimed writer and is currently working on her debut feature film, Beachslap, commissioned by the Irish Film Board and Grand Pictures. Her BBC Radio 4 series Irish Micks and Legends, co-written with Yasmine Akram, was nominated for a Chortle Award in March 2013, and she also writes a column for WUWO magazine.

Topping all of that, Aisling's late grandfather Micheál O'Suilleabháin was a Gaelic novelist and poet, her grandaunt Siobháin Ní Shúilleabhaiin is a prolific Gaelic writer and dramatist, and her mother is a retired professional flatrace jockey. Fact.