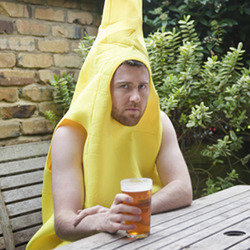 Ga-loot: noun /ga'lu:t/ slang - a fellow, especially one who is strange or foolish. In 2013 Lloyd has decided to become a little bit more reckless. A stand-up comedy show about embracing your inner bell end. Will contain jokes about rum, bears and helicopters. As seen/heard on Don't Sit In The Front Row (Sky Atlantic), The Unbelievable Truth (BBC Radio 4), Wordaholics (BBC Radio 4) and Ask Rhod Gilbert (BBC1). 'Brilliant, charming, understated' (Independent).

Regular guest on BBC One's Ask Rhod Gilbert, Lloyd Langford returns to the Edinburgh Festival Fringe with his frank and incredibly funny new stand-up show, Galoot. He can be seen performing at the Gilded Balloon Sportsman's Bar from the 31st July - 26th August.

"The unexamined life is not worth living" - Socrates.

Inspired by an e-mail that was embarrassingly delivered to the wrong recipient, Lloyd Langford embarks upon a journey of comedic self-assessment. And despite his best intentions he worries that deep down he might be a bit of an idiot.

Galoot is by turns a candid, heartfelt and hilarious look at the discrepancies between how we see ourselves and how others see us.

As well as being a regular on Ask Rhod Gilbert (BBC One), Lloyd has made many television appearances, including Dave's One Night Stand (Dave), Russell Howard's Good News (BBC Three), and Don't Sit In The Front Row (Sky Atlantic), Additionally, Lloyd has numerous radio credits to his name including The Unbelievable Truth, Wordaholics, It's Your Round, and The Now Show, (all BBC Radio 4.) He also plays Bryn in Everybody Quite Likes Justin, with Justin Moorhouse.

As a seasoned writer, Lloyd has contributed to a plethora of hit shows shows such as Never Mind The Buzzcocks (BBC Two), Ask Rhod Gilbert (BBC One), Live At The Apollo (BBC One), Have I Got News For You (BBC One), 8 out of 10 Cats (Channel 4) and Mock The Week (BBC One).