Simon's back in the village, and the Vicar's particularly looking to give him a warm welcome. Her parishioners, however, are somewhat slow on the uptake. When things go awry for the couple, Dibley is plunged into disarray. 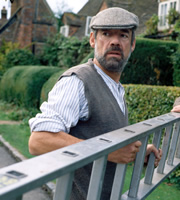 Alice and Hugo return from their honeymoon after spending 14 months in prison, having unwittingly smuggled £84m worth of cocaine into Turkey. Chatting to the Vicar, Alice reveals she's been putting on weight at an alarming speed; Geraldine self-diagnoses her pregnancy using more modern methods than those appreciated in Dibley lore!

Geraldine gets very excited when she receives a surprise phone call from Simon Horton who wants to drop by and see her. Alice gives her some key advice about wearing only a pink duffle coat to look "most moist-making", but Geraldine declines.

When Simon arrives, the pair plan a night of steamy passion together. Unfortunately she finds the evening interrupted by all of the villagers, who each drop by in turn with different requests: Frank and Jim require an answer for The Sun quick crossword, and David brings round Scrabble to play. After waiting alone for some time, Simon appears on the stairs dressed only in a robe, asking when Geri might join him! Everyone scuttles off sharpish, eagerly speculating about the ethics of a vicar having premarital sex, and Geraldine and Simon head upstairs...

Despite a night of electric lust together and some romantic strolls through the beautiful countryside around Dibley, Simon soon has an admission to make. There's another girl, back in Liverpool, who he's now confused about. In a fit of anger, disgust and hurt, the Vicar throws him out of the house and begins indulging in a chocolate and ice cream binge.

After 2 weeks without a proper service, and only Frank as lay reader (having literally bored someone to death) in her place, the council meet with fear for the Vicar and her future. She tenders her resignation to them, and leaves a very difficult decision in their hands...