It's been 10 years since Geraldine arrived in Dibley, and the villagers set out to celebrate in ways that only they could dream of. A lingerie model, chocolate fountain, copious amounts of wine and the Archbishop of Canterbury make this a Christmas to remember! 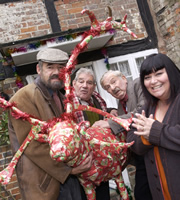 It's Geraldine's 10th Christmas in Dibley. A party is arranged for Christmas Eve, and Hugo has the bright idea of villagers competing to write a new carol to mark the occasion, which Geraldine meets with enthusiasm. David comments that she ought to be a Bishop by now, and, only half-jokingly, adds that she is wasting her life in the village. Could he be right, Geri begins to wonder?

Back at the vicarage, she and Alice end up talking about which female celebrities they would fancy if they were so inclined. Flicking through a fashion magazine, the Vicar picks lingerie model Rachel Hunter. Perhaps a little predictably for the mad little village of Dibley, this is a bad move: the next day, Rachel appears at the front door. She's running late for an event in another nearby village and needs somewhere to change - when Alice walks into the house, Rachel appears on the stairs in only her underwear!

Later, Geraldine discovers that Frank has decided not to attend the party. As he explains that everyone, from his psychiatrist to his mother, has told him that he ruins any event he is at, Geri's compassion overtakes her brain and she invites him to not only attend but deliver the keynote speech in her honour. Frustrated at Frank's continued dithering, Geraldine wonders again whether she is having any effect whatsoever in the village, and begins looking at an application for a higher position...

At the party the next day, everyone is astonished that Frank has taken the Vicar's advice. His speech is not just clear and to the point, it's short! David reveals that he has organised two very special surprises for the devoted Vicar. With a flourish, Jim and Owen unveil the first: a gigantic chocolate fountain, which she is overcome by and literally - and very enthusiastically - dives into. David looks on aghast as he reluctantly is forced to reveal his second surprise: the Archbishop of Canterbury! Shocked, and drippnig with liquified chocolate, Geri drops to her knees. And invites the Archbishop to lick her.

After the party, washed and dried, Geraldine becomes increasingly depressed at having shown herself up in front of the Archbishop. Surely there is now absolutely no chance of promotion, nor any other kind of escape from the insanity of Dibley? Now completely drunk, she just about manages to greet Alice - who reminds her that it's Christmas Eve, and in 9 minutes she is supposed to be delivering Midnight Mass!

With a mix of cold-water head-dunking, face slapping and shouting, Alice sobers her friend up a little. Unfortunately, not enough to pull off the service unnoticed, even on the pretence of the 'performance' being "a warning about the collapse of society if someone as important as a vicar falls prey to binge drinking"!