Easter is approaching, and whilst the village is struggling to make good on its Lenten fasts, old Mrs Cropley is taken ill. The prognosis is bleak, and she asks the Vicar one final favour before passing into the hereafter...
Preview clip 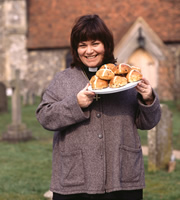 Alice engages Geraldine in a discussion about magic. However, all she really wants to talk about is the existence and purpose of the Easter Bunny. She's so adamant of its existence that Geraldine relays their disagreement to the Parish Council; David explains that there's a tradition in the village that someone drops chocolate eggs around the village every Easter.

As it's the start of Lent, Geraldine suggests that the villagers should give up bad habits: Owen will stop swearing; Letitia will cook normally; Jim will stop dithering; Frank will stop being pedantic; David will be nice to people; Geraldine will give up chocolate; and Hugo will give up lustful thoughts. Geri suggests that everyone donate £1 for each occasion they fail their Lenten fasts, and that the proceeds should go to establishing a video club in the village.

Suddenly, Mrs Cropley is taken ill. It's her heart, and the prognosis is not good. Confined to her bed, she calls the Vicar for a heart-to-heart and reveals a great secret: she's Dibley's Easter Bunny! Letitia asks her to take over the key role; the Vicar agrees, and "always lets you dock in her jetty Letty" is content; she passes away moments later.

Come Easter Sunday, Geri finds herself up long before dawn, dutifully dressed in a large white bunny costume, to deliver eggs around the village. However, it seems old Mrs C has one last surprise in store for the residents of Dibley!

From the Vicar of Dibley 1996 Easter Special. The village members are in confusion over the identity of the elusive Dibley Bunny.