It's Christmas - not to mention the turn of the Millennium - in Dibley, and the Vicar is determined to put on a festive show that will be talked about for years. With Hugo, Frank and Owen in charge, they don't get off to a good start, but plans for a special live nativity, with the actually pregnant Alice as Mary, are soon being made. 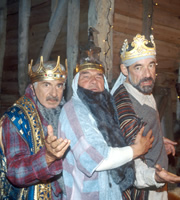 It's Christmas 1999, the dawn of a new millennium, so Geraldine thinks about the need for some seasonal entertainment in the village. The natural choice is some kind of nativity production, but that's far too clichéd, as apt as it may be. Alice wonders whether it might be possible to stage a 'live' nativity outdoors around the village; she then becomes too enthusiastic about this and suggests that the audience need to be shouting "He's behind you" to the wise men when looking for Jesus!

Geraldine jumps on the first half-decent idea her verger has had. Auditions immediately commence, but with all of Dibley's usual eccentricity: Frank auditions as a wise man and speaks in the voice of Stephen Hawking; Owen wants to play the King and so dresses as Elvis; and Jim also wants to audition for the King, so dresses as Martin Luther King! Meanwhile, Hugo lets on that David has his eye set on the part of God...

Alice and Hugo prepare very successfully for the roles of Mary and Joseph, (somehow) learning Hebrew perfectly. Geraldine casts David as Herod, who insists on bringing out the allegedly "nicer side of Herod"! The rehearsals happen with great chaos and misunderstanding, and the Vicar keeps having to step in to show Alice and Hugo in particular, how to perform.

On the evening of the play, things start going predictably and terribly awry. Animals run off, leading the Vicar as narrator to procede through Dibley on the back of a tractor, no one seems able to remember their lines or follow where the story has got to - and to top it off, Alice goes into labour, which causes mayhem and confusion on the stage but makes for the most realistic nativity since the real one!

The only question Alice has is, has she given birth to the Baby Jesus?