When could be worse to suffer more than a fortnight without running water, than during a summer heatwave? It's all down to demand in the region, and fortunately the water company have a plan to resolve it. It'll make millionaires of some Dibley residents, but have long-reaching consequences. 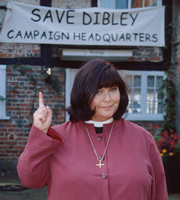 The Parish Council want to celebrate the Millennium with a statue in the village. But something more urgent is afoot: namely, a water shortage. Every resident is creative in cutting water usage, with Alice watering Geraldine's plants using vodka rather than water, and no one able to wash or flush their toilets. This causes a particular problem for Owen - not to mention those around him!

Officials from the water-board arrive to explain the problem. The wider area is experiencing high population growth, and the existing system can't cope with demand. Luckily they have a plan to solve the matter: they want to turn Dibley into a giant reservoir and move the residents elsewhere. Everyone's bribed handsomely to move - Owen and David are particularly keen to accept multi-million-pound payouts - and for a short while it seems like a good idea.

However, Alice, in her simplistic view of the situation, soon makes them realise just what they will be leaving and what they will lose forever. Spurred on by an emotional, rousing speech from David, they resolve to save the village at any cost. Whilst the Vicar struggles to devise the right plan, Owen knows exactly what must be done - something rather creative involving farmyard animals and an axe, in an effort to persuade the water board that Dibley is home to the first of a new breed of animal!

After telling Owen in no uncertain terms that such a plan would involve an unacceptably sickening amount of violence, Geraldine resorts to chaining herself to the church in protest. A week passes with not a sniff of interest from the media - until, of course, she has to pop off to the toilet.

Frank, left in her place, is predictably incapable of relaying to the TV reporter on the scene anything other than the merits of the Vicar's arse, but somehow his rambling appearance does the job, and soon the small village is crammed with international media outlets.

The water company are soon back, this time in front of the cameras and suitably apologetic. Surprisingly, Owen's horrific plan appears to have worked, as their spokesman cites the discovery of a "blue-crested, one-legged chicken" as primary reason for cancelling the Dibley Reservoir scheme!

In celebration of village's reprieve, a decision on the subject of the new statue is reached - and there's one more surprise in store for the Vicar.