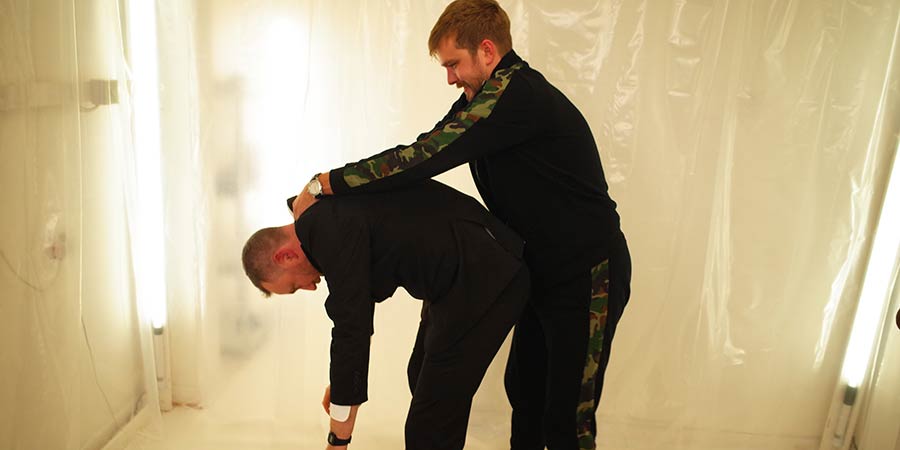 * Paul Sinha: A school chess trophy that he won for three years-in-a-row, and claimed to his father that he was allowed to keep it. He lied and actually just stole the trophy. - 5
* Joe Thomas: A recording of Pavarotti holding the note "cer" when he sings "Vincero" from Nessun dorma. - 4
* Iain Stirling: £200 cash held in a money clip. - 3
* Sian Gibson: A life-size pillow version of herself. - 3
* Lou Sanders: A voucher for a trip to possibly see some dolphins. - 2

Task 1: Make a picture in the sand of a former Taskmaster contestant using one of these implements. You must roll the dice to choose your implement. Nothing but air may touch the sand at any point. You have ten minutes. Your time starts as soon as you roll the dice.

Task 2 (Team Task): Catch all the red balls in things from the shed. Catch all the yellow balls in clothing. Don't let the green balls touch anything other than the grass. Catch the blue ball in something from the kitchen. Red balls are worth one point, yellow balls two points, the blue ball five points, but you lose two points for every green ball that touches anything other than the grass. You may not touch the ball machines. Any non-green ball which touches the ground at any point will not count. Highest score wins. The balls will start firing in two minutes from now.

Live task: Complete the five-syllable word started by the Taskmaster. Honk your horn if you think you know what word the Taskmaster is going to say. If you guess it correctly after one syllable you get five points, if you guess it correctly after two syllables you get four points, three syllables for three points and four syllables for two points. If you guess incorrectly, you lose all your points. You may only guess once per word. Highest score after ten words wins. Winner takes all.

Check out Joe Thomas's technique for moving a blow up watermelon ball with water, to the finish line.